Some things should never be bred…

“Creepy and atmospheric, Darren Speegle’s THE THIRD TWIN is a winding, lushly written nightmare that will linger with you. Yes, you.”—Paul Tremblay, author of A Head Full of Ghosts and Disappearance at Devil’s Rock

Barry Ocason, extreme sportsman and outdoor travel writer, receives a magazine in his mailbox and opens to an ad for an adventure in the Bavarian Alps. Initially dismissing the invitation, which seems to have been meant specifically for him, he soon finds himself involved in a larger plot and seeking answers to why an individual known only as the elephant man is terrorizing his family.

Barry and his daughter Kristen, who survived a twin sister taken from the family at a young age, travel from Juneau, Alaska to the sinister Spider Festival in Rio Tago, Brazil, before he ultimately answers the call to Bavaria, where the puzzle begins to come together.

Amid tribulation, death, madness, and institutionalization, a document emerges describing a scientist’s bloody bid to breed a theoretical “third twin,” which is believed to have the potential, through its connection with its siblings, to bridge the gulf between life and afterlife. The godlike creature that soon emerges turns out to be Barry’s own offspring, and she has dark plans for the world of her conception that neither her father nor any other mortal can stop.

“Smart. Imaginative. Literate. Original. All of Darren Speegle’s fiction shares these characteristics. Add in intriguing and complex for the occult mystery of The Third Twin. Above all the novel is a highly compelling and entertaining read. It has my highest recommendation.” —Gene O’Neill, Lethal Birds, The Cal Wild Chronicles

“Speegle’s very accessible voice takes you gently by the hand — and then pulls you into shadows that are subtle and deadly but studded with stars.”—Michael Marshall Smith

Barry Ocason regularly travels all over the world to write about the more remote and lesser known festivals such as the Spider Festival in Rio Tabo, Brazil. He only found out about this when a travel magazine arrived unexpectedly through the door advertising it. So bags were packed for him and his teenage daughter Kristen and they made their way from Juneau, Alaska to a place they would never forget.

Any parent would be horrified to discover that their daughter was being followed but for Ocason it was unbearable, he had already lost one daughter, Kristen’s twin, when she was murdered and now the man that haunted his own dreams was being described by his daughter as her stalker and he was here.

This book played mind games with me, it is a very dark and disturbing.  You know that feeling when you feel like someone is watching you and you turn around and no one is there but you feel if you had been a second sooner you would have seen someone. That is how reading this book is. Through history there has been a fascination with twins well this story takes a step further to create a third twin, a much darker and disturbing bridge into the unknown.  And the scary thing is The Ocasons are not on their own.

Why not click below for a little taster of this book. Bet you want more.

Interview with the author:

So what makes this thriller novel so special?

Darren Speegle: I suspect it is unlike anything you’ve ever read. It deals with family issues at first, then segues into darker territory, the harrowing suspense of knowing you are being targeted, as a family, by a man in an elephant mask who is looking for something that you don’t understand the meaning, much less allure of. Until the last, that is, when the final revelations prove to be about more than this world, more than the next. The Third Twin is a ladder-like journey into other, transcendent spheres.

Tell us more about this novel’s lead character.

Darren Speegle: Barry Ocason is supremely confident in his life, deals with situations on his terms. Has command of what goes on around him. Has raised a fine daughter. Retains a reasonably healthy relationship with his ex-wife, though the reason for their divorce was so sudden, so horrible and meaningless, it might have resulted in far worse. He has a grip. Has a handle on existence. Tries to. Until. Until reality breaks down and everything he thought he understood about life melts in front of him. Then the warrior and survivor he is kicks in and will stop at nothing to find out why what’s happening is happening.

Why should readers give psychological thriller a try?

Darren Speegle: Because it is different, unique. If you want to take a journey you have never taken before, this is the one. I wrote the thing in a war zone, Iraq, during heavy activity. My mind went where it wanted to. The Third Twin is the product of that experience. It’s a dark fantasy suspense thriller trip you’ll never forget.

And here’s a dedicated webpage if you want to take a look: 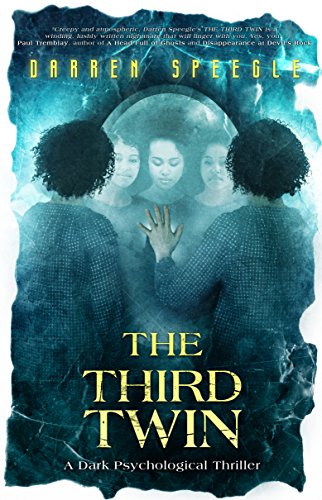 Pen Down Your Thoughts